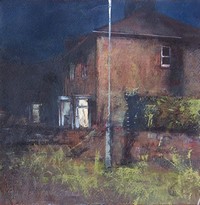 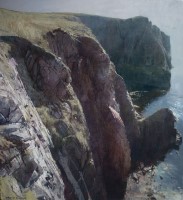 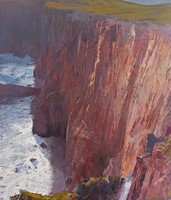 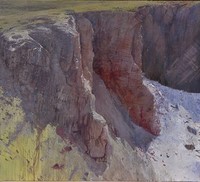 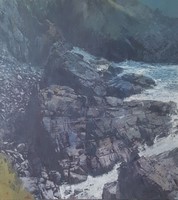 Born, Lancaster in 1967.  After my foundation course at Storey Institute, Lancaster and Morecambe College of Art, I went on to study Illustration at Falmouth school of Art, Cornwall. Whilst there I developed an interest in the Old Masters which I later pursued under the mentoring of Chris Robinson, a graduate of the Royal Academy and practicing artist.

Since 1999 I've enjoyed over thirty solo exhibitions in Dublin, Cornwall, Cumbria, Yorkshire, Lancashire and Shetland.  I've also taken part in well over fifty mixed exhibitions, many of them at various galleries in London.
Since 2011, when I rented a studio in Scalloway for a month, I have been a regular visitor to Shetland. In 2012 I had a major solo exhibition, ’30 Days of Light’, at the Lerwick Museum and Archives.  Two years later in 2015 Bonhoga Gallery hosted my second Shetland exhibition, 'Between Rocks and Hard Places’.  Each year sees a growing body of Shetland based work.

I draw upon a diversity of subject matter from wilderness landscape to the urban landscape to dancers, poets, musicians and the odd comedian as featured in my 2015 exhibition, 'Performance'. Each offers something different to the conversation.  Each informs the others.  It feels like playing in different pools, taking a little water from each to mix in with the next.

Getting out there in the elements, painting direct is integral to my working practice.  The information available via the senses is unparalleled by any other means.  Simply put, it is the single best way of exploring your subject and your relationship to it.  These experiences feed into the studio based work.  I'm a figurative painter that believes everything is in essence abstract.  To paint figuratively with any success is to paint abstract.
My work can be seen with galleries across the UK from Shetland to Cornwall including with galleries in London.  I have paintings in collections worldwide.