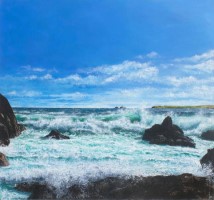 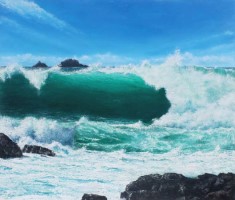 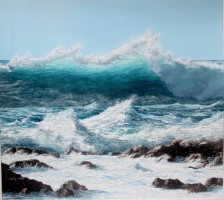 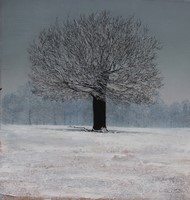 Over the black rocks

Since leaving Art school in the early 1970's Paul has spent his whole professional life creating visual imagery. Firstly as a T.V. Graphic Designer with the BBC in Wales and then moving to London and heading the graphics' team responsible for pioneering Breakfast Television in the U.K. and the first introduction of online computer graphic systems. In the early 1980's Paul joined the Post Production industry in Soho. He was a senior executive and creative director, designing directing and supervising visual effects sequences for t.v. commercials, broadcast programmes and feature films. He gained an international reputation and won awards worldwide for his work.

In 2003 Paul and his wife left the "rat race" and moved to Cornwall. Paul commenced on his lifelong ambition to become a successful artist. He had his first exhibition a year later with the Great Atlantic Galleries and had a long relationship with the gallery until it sadly had to close. Paul says of his work...

"When you work on a commercial that can cost 10s of thousands and can take weeks to produce you only have a 30 second slot. Every frame has to be picture perfect. Meticulously layering hundreds of components to create these sequences. All this skill together with 30 years of experience I bring to my paintings. I apply hundreds of layers using all kinds of paints and image making tools and textures. Most of my work is based on the amazing seas around the Cornish Coast. I try to catch the gravity and mass of water that is there in any single moment. They take a long time to produce and I hope you enjoy the images as much as I enjoy painting them."